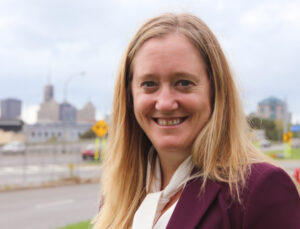 Kristen is a trial attorney experienced in handling Matrimonial and Family Law matters, discrimination cases, bankruptcies, estate planning, Workers Compensation, Criminal Law, collection actions, and Labor and Employment Law. After earning her law degree in 2004, Kristen was an Assistant District Attorney in Erie County and town prosecutor in Niagara County, as well as an adjunct instructor of a Master’s level Health Care Law and Ethics class at Hilbert College. She is a member of the New York State Bar Association and the Erie County Bar Association. Kristen was named a Rising Star Super Lawyer in 2015. She recently successfully concluded a sexual harassment trial on behalf of an employee tormented by coworkers at a large trucking company.

As a divorced mother with three daughters, Kristen understands the sensitivity of Matrimonial and other Family Law issues, as well as the strain family difficulties can place on a household, sometimes requiring other forms of legal intervention as well.

Kristen joined the Center for Hope WNY because she believes that victims of abuse deserve an environment where they feel safe to seek a just outcome and a new start in life. Working closely with the Center for Hope team, she is an advocate not just for effective legal representation, but also the Center’s holistic approach that includes making counseling and support services available to individuals leaving troubled family situations or dealing with the consequences of narcissistic abuseNarcissistic Abuse is a form of emotional abuse projected by a narcissist on to another individual, Although narcissistic abuse. Kristen believes that everyone has worth and should be treated with respect and should never be made to feel afraid of seeking their legal rights in the courtroom.

A former partner at Brown & Kelly LLP, Kristen is the Managing Attorney at The Law Offices of Kristen Balbick Degnan and Of Counsel to The Law Office of Hope R. Jay, PLLC. She is admitted to practice law before the Supreme Court of the United States, the United States District Court, Western District of New York, and the Western District of New York Bankruptcy Court. A native of Batavia, New York, Kristen has resided in the Buffalo area since 2004.